The day began with a huge wake up call. The night shift nurse came by to check Eleanor’s port was working and to take a blood test prior to her chemotherapy treatment which would begin later that day. The line that was inserted into Eleanor’s port, or her ‘wiggle’ as she affectionately refers to it, wasn’t playing ball, it appeared that it may have been dislodged in the night or moved when Eleanor had been tugging on it when she was coming around from the anesthetic. There was only one thing for it, the dressing needed to be removed, as well as the line and a new one inserted so they could be sure that the port was in working order.

It was 6:30am and Eleanor screamed for the entire 10 minutes it took for our very lovely nurse to take off the huge dressing and remove the needle that was inserted into the port.  Then as there was no time to apply any local anesthetic to the area, the new needle had to be inserted without anything to numb the pain. Cue another bout of screaming. When it was over I’m not sure who looked more traumatised!

After a few hours, some breakfast and before Tim and my Mum arrived we were whisked off to the Nuclear medicine department so Eleanor could start the process of an EDTA test. This would test the function of her kidneys by injecting a small amount of radioactive material (called EDTA) into her blood. A blood test would then be performed at two, three and four hours later to test how her kidneys had processed the EDTA. This went as well as the first part of the morning, with Eleanor screaming and refusing to hold out her cannulated hand, it took three of us about 15 minutes to persuade her it wouldn’t hurt whilst using bribes ranging from a sticker to a whole book of stickers (plus the standard sweets and chocolates I am sure most parents resort to in times of need!) Thankfully, eventually she relented. Sat on my lap she cuddled me tight and the first part of the test was performed, we were then taken back down to the ward to wait for Tim to arrive and to play for a couple of hours before the first blood test needed to be taken.

Tim and my Mum arrived shortly after we got back so I took the opportunity to head off for a shower while they entertained Eleanor and she told them all about her morning.

When I closed the door of the shower room behind me, I had to take a deep breath to stop myself from bursting into tears. I had been running on adrenalin all morning and suddenly it all seemed to wear off and it became overwhelming again. I put the toilet seat down and sat there for a few minutes with my head in my hands, just telling myself to breathe and that it was all going to be OK. I held it together until I was in the shower and then a whole weeks worth of emotion flooded out all at once. I sat on the floor of the shower and cried like a baby. I cried because I couldn’t believe it was happening. I cried because seeing my little girl so frightened was by far the worst pain in the world. I cried because I thought, if I feel this weak and overwhelmed so early on how will I ever cope with the roller coaster that is sure to follow. I have never asked ‘why us’ at any point in our journey so far. I cannot justify asking that question as to me that means that I would wish for it to be someone else, instead of us. I can honestly say that I would not wish this on my worst enemy.

The afternoon came and went quickly with visits from various people. We met a dietician. We had a nice chat with a Clic Sergeant social worker who talked to us about the support they can offer us along with a tonne of other information.
We were also given a book called ‘Mary has a brain tumour’ I’m sure it is a great resource for children to understand what is happening to them, but it’s not really my idea of a bedtime story. I think I will stick to the Mr Men books!

A play specialist came around and talked to us about Beads of Courage  and Chemo Duck (I will talk more about these incredibly rewarding programmes in future posts, they really are simple yet extraordinary concepts!) Then before we knew it the nurse popped by to tell us that the chemotherapy was ready and that we could start.

On Eleanor’s treatment protocol, she is given two different chemotherapy drugs; Vincristine and Carboplatin. In Eleanor’s case, Vincristine is given in syringe form (a push) it is a quick process where the syringe is just attached to her ‘wiggle’ and pushed through over a few minutes. The Carboplatin is an infusion so she is attached to a machine which drip feeds the treatment in to her over an hour. Toilet trips are fun as it means wheeling the machine and directing Eleanor without getting tangled up in the wires!

Once the chemotherapy treatment was complete we were told we could go home that night as long as Eleanor seemed well and that she showed no signs of a reaction to the drugs. After a little while we were given our discharge papers along with a plethora of anti-sickness drugs and antibiotics and sent home to return a week later for chemo number two. 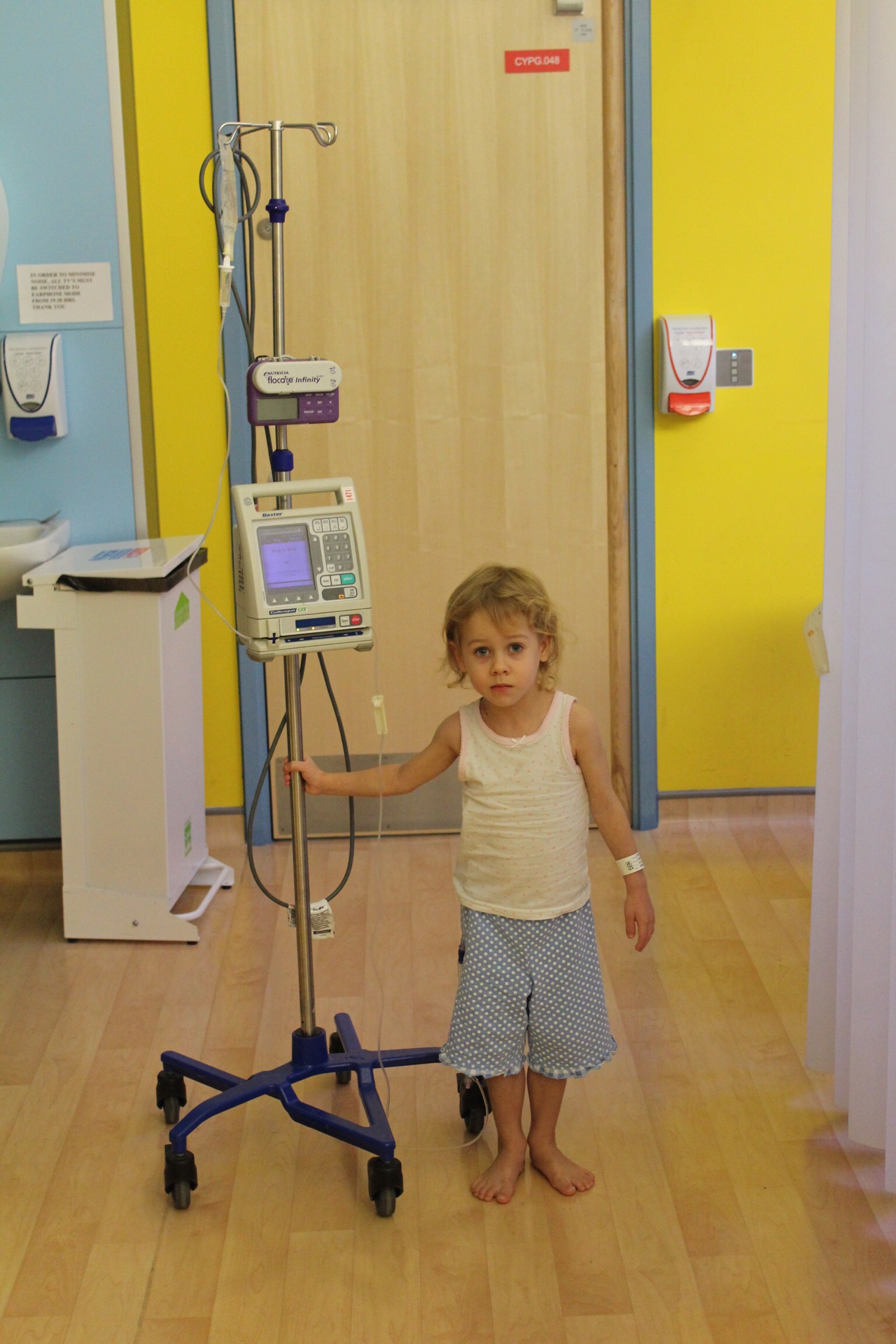